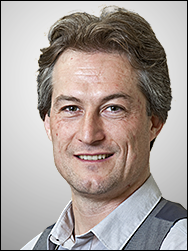 Ralf Eichhorn received his PhD from the University of Augsburg in 2000. After postdoctorial work in Augsburg and Bielefeld, he joined Nordita in January 2009. His general research interest is on the statistical mechanics of complex systems with application to biophysical problems.

Ralf's current research activities are centered around the theory of transport processes in non-equilibrium systems, where thermal noise typically plays a dominant role. Apart from studying idealized stochastic models, Ralf is also interested in developing concrete realizations of such transport phenomena, aiming at biophysical applications in microfluidic devices (lab-on-a-chip) for the separation, purification or mixing of colloidal particles and complex biomolecules like DNA or proteins. This is motivated by the vision of a lab-on-a-chip, which combines all preparational and analytical steps of a diagnostic device in a single microfluidic system. A further direction in Ralf's research covers the dynamic aspects of molecular recognition. Molecular recognition of two biomolecules occurs due to (non-specific) interactions between complementary regions on their surfaces. Within the framework of coarse-grained models for the molecules, the dynamic aspects of the recognition process in the crowded environment of a cell are studied. More recently, Ralf became interested in stochastic thermodynamics, a new field in non-equilibrium statistical mechanics addressing the problem of generalizing and extending concepts from equilibrium statistical physics to the non-equilibrium realm.

Ralf has intense collaborations with scientists at KTH and has established contacts to several groups in the Nordic countries (e.g., Aarhus, Lund, Gothenburg). He organized two "Nordic Workshops on Statistical Physics" (March 2010 and Feb 2011), is co-organizer of a workshop on DNA self-assembly (May 2011) and of two four-week scientific programs at Nordita (fall 2011 and spring 2012). Moreover, Ralf co-organizes an international seminar series on "Complex systems and biological physics".