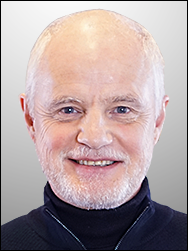 Antti Niemi received his PhD from MIT in 1983. He then moved to the Institute for Advanced Study in Princeton and in 1985 he became Assistant Professor at the Ohio State University and Visiting Professor at UC Berkeley. In 1988 he moved to CERN Theory Division. In 1989 he started as Group Leader at Research Institute for Theoretical Physics at Helsinki University, and in 1990 as the Founding Director of Institute of Particle Physics at Aalto University; both are now part of Helsinki Institute of Physics. Since 1992 he has been Chaired Professor of theoretical physics at Uppsala University, since 2005 he has been Directeur de Recherche (DR1) at CNRS, and since 2017 he has been at Nordita. He has also held several visiting professorships including Brazil, Canada, Finland, Russia and China, where he advises PhD students in Tianjin and Beijing, and in Shanghai he is a Founding Member of the Wilczek Quantum Center.

Antti worked several years on quantum field and string theory. He extended the Parisi-Sourlas supersymmetry, invented the parity anomaly, applied topological techniques to fermion fractionization, developed diagrammatic rules for relativistic finite temperature quantum field theories and pioneered the use of path integral localization in quantum field theory. In a long and extended collaboration with Ludvig Faddeev he introduced the concept of knotted solitons, and field decomposition techniques in Yang-Mills theories. Subsequently his interests moved to biological physics where he develops geometrical and topological methods with applications to protein folding and dynamics. His present interests include also time crystals and their potential use from magnetic materials and cold atom Bose-Einstein condensates to models of molecular motors.

Antti coordinates the activities of Frank Wilczek's research group at Stockholm University, including the organization of the Quantum Connections series of workshops and summer schools. Antti has received the Outstanding Junior Investigator grant of DOE, the Goran Gustafsson Prize of KVA, and both the Changjiang and Thousand Talent awards in China. He is a Managing Editor of Reviews in Mathematical Physics, a Director of the Brahe Foundation, and a foreign member of the Kungliga Vetenskapssocieten in Sweden and Finska Vetenskaps-Societen.