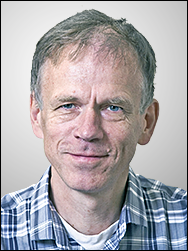 Professor Axel Brandenburg received his PhD at the University of Helsinki in 1990. After two postdocs at Nordita in Copenhagen and at the High Altitude Observatory at the National Center for Atmospheric Research in Boulder/Colorado he returned to Nordita as Assistant Professor for just over a year before he went in 1996 as full Professor of Applied Mathematics to the University of Newcastle upon Tyne. In 2000 he moved once again to Nordita, this time as full professor. He became professor at the Department of Astronomy in Stockholm when Nordita moved from Denmark to Sweden in 2007

Axel Brandenburg is working in the field of astrophysical fluid dynamics and has also an interest in selected topics of astrobiology. He is particularly interested in the question of magnetic field generation from turbulent motions with applications to the Sun and stars, accretion discs, galaxies, and the early Universe.

His work on accretion disc turbulence was the first to show that the magneto-rotational and dynamo instabilities lead to a sustained doubly-positive feedback. Recently, he contributed to clarifying the long-standing question of the suppression of the dynamo effect in generating large-scale fields. He is also responsible for the maintenance of the Pencil Code, which is a public domain code (pencil-code.googlecode.com) for astrophysical fluid dynamics that is well suited for large clusters with distributed memory.

In 2009 he received funding from the European Research Council for a project on Astrophysical Dynamos with a volume of 2.22 M € to support 4 PhD students, 4 post-docs, one assistant professor and several senior visitors.