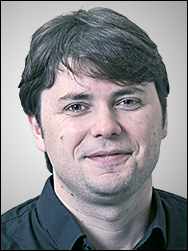 Dmytro Volin received his PhD from the Université Paris-Sud XI in September 2009. His thesis was conducted and supervised at the Institut de Physique Théorique, Saclay. From October 2009 till October 2011 he had a postdoctoral position at the Pennsylvania State Univeristy, then he moved to Sweden to join Nordita for his second postdoc.

Dmytro's main interests are strongly interacting field theories and integrable systems, with emphasis on the integrability in AdS/CFT. In his works, he contributed to the solution of the AdS/CFT spectral problem, in particular to the solution of crossing equations and to a pioneer derivation of an AdS/CFT analog of Destri-de Vega equations. At present he is working on the bootstrap program for integrable systems at finite volume. This is in line with one of his long-term goals: to understand microscopic mechanisms behind the AdS/CFT duality, in N=4 SYM and beyond, without direct appeal to string theory.

Currently he has several active collaborations with scientists from France, Belgium, UK and USA. Dmytro is teaching an advanced online course on quantum integrability.