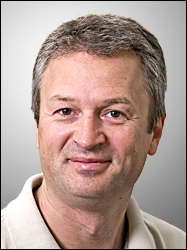 Konstantin Zarembo received his PhD from the Steklov Mathematical Institute in Moscow in 1997. After postdoctoral position at the University of British Columbia in Vancouver in 2001 he moved to the Uppsala University as Assistant Professor. In 2008-2010 he hwas Directeur de Recherche de 2ème classe of CNRS at the École Normale Supérieure in Paris. He became Professor at Nordita in 2010.

Konstantin's field of research is theoretical high-energy physics, with main interests in quantum field theory, string theory and integrable systems. During the last few years he has been working on the AdS/CFT correspondence, mainly on non-perturbative aspects of the relationship between gauge fields and strings, and on exact results in quantum field theory that can be obtained with the help of integrability. He pioneered the use of integrability and the Bethe ansatz in the AdS/CFT correspondence, which has led to new non-perturbative results in quantum field theory. He has also worked on various aspects of string theory, on statistical application of field theory, on color superconductivity and on matrix models.